Chris and I attempted to climb the Ballachulish Hosreshoe via Schoolhouse Ridge last year but, frustratingly, we were beaten back by a combination of deep snow and adverse weather conditions. So feeling like we had some unfinished business we had been killing time just waiting for some winter to arrive so we could arrange another attempt.

A week earlier we had experiences a very wet and cold Chreag Pitridh near Loch Laggan while staying at “The Bunkhouse at the Roundhouse” so we were hoping for some better weather. The conditions running up to the weekend were perfect however Sunday looked like being a bit more of a challenge. We set off from Dunfermline at 6:15am to make sure we utlised as much day light as possible. A relatively quick drive meant that we were parked in Ballachulish for 8:15am. 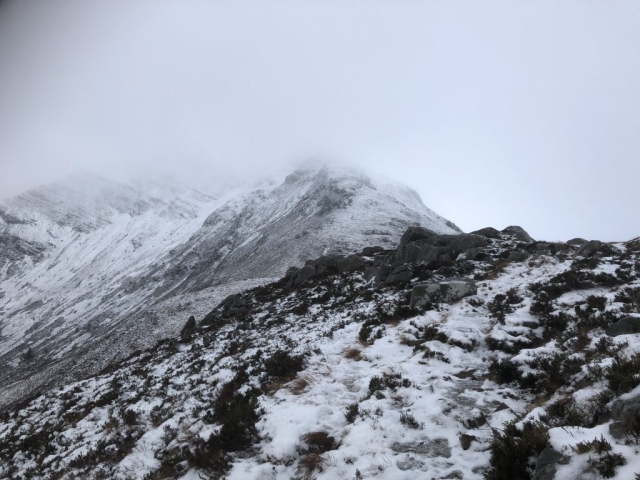 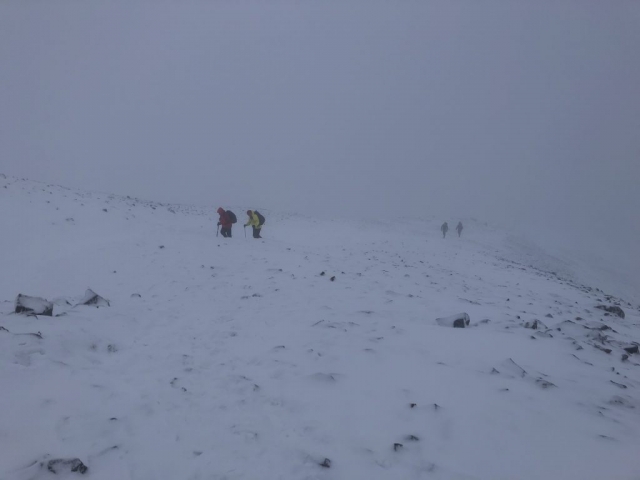 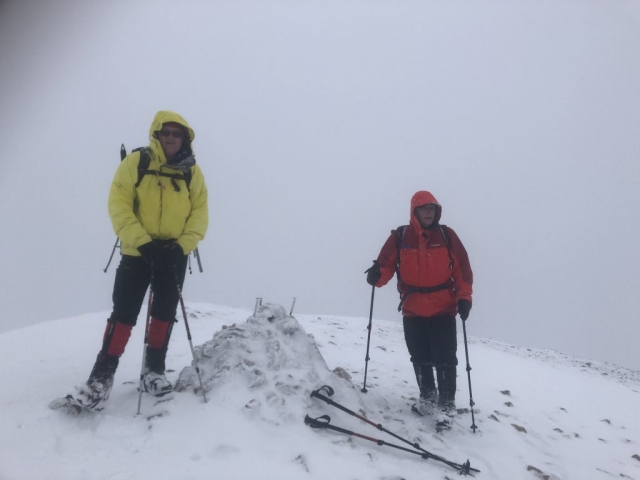 We parked at the car park at Ballachulish Primary School. We still don’t know if this is strictly allowed but the gates were open so we drove in and got ready. There is a rather handy area in the playground with a cover and seating that allowed us to get our boots on and stay dry.

There isn’t an easy way to gain the initial height on Beinn Bhan so we decided to track the burn up to the north of School House Ridge and then followed a forrestry fence to gain height. After a bit of huffing and puffing we caught the stalkers path that traverses the hill north before swinging around W and then NW to catch the main ridge up Beinn Bhan. Showers were coming and going so we were unsure of what to expect.

It wasn’t long before we started to experience more significant snow underfoot and in more exposed areas the temperature was definitely dropping.

As we continued to climb up Beinn Bhan the conditions deteriorated and proved difficult between Beinn Bhan and Sgorr Dhearg. The edge of the ridge on our right was aways in view which allowed up to easily navigate up to the first munro of the day. 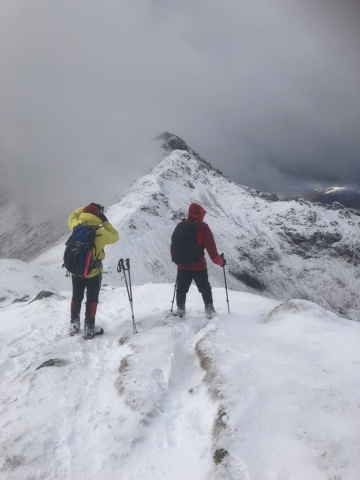 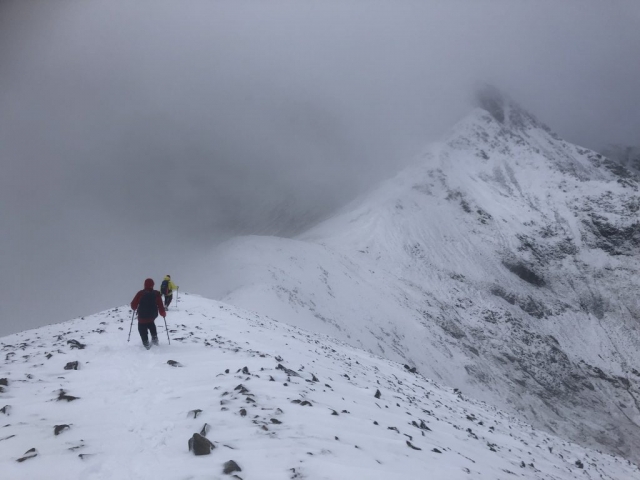 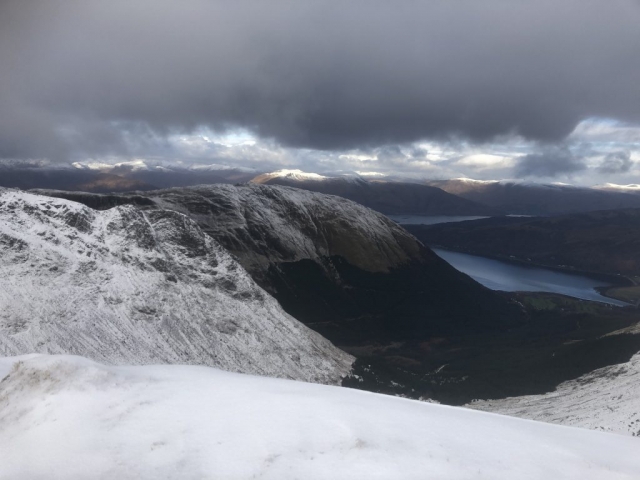 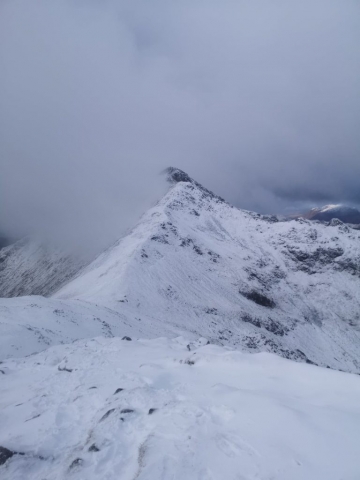 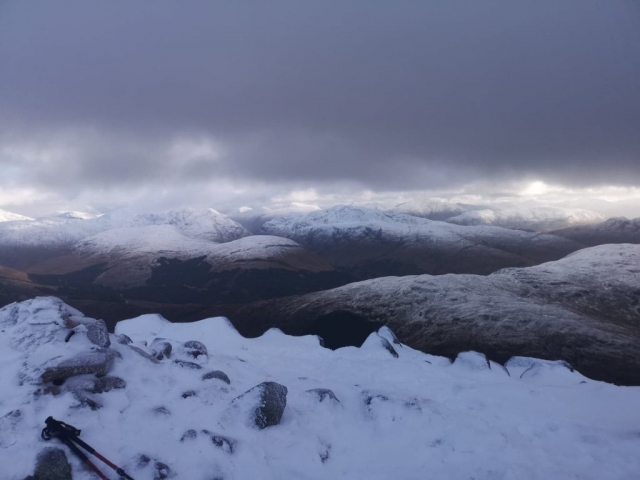 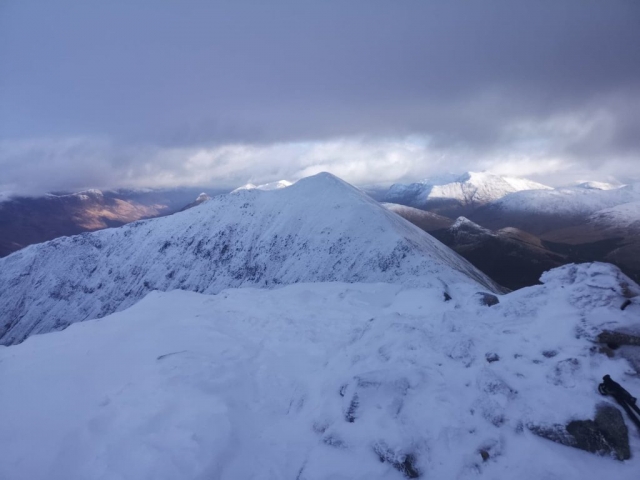 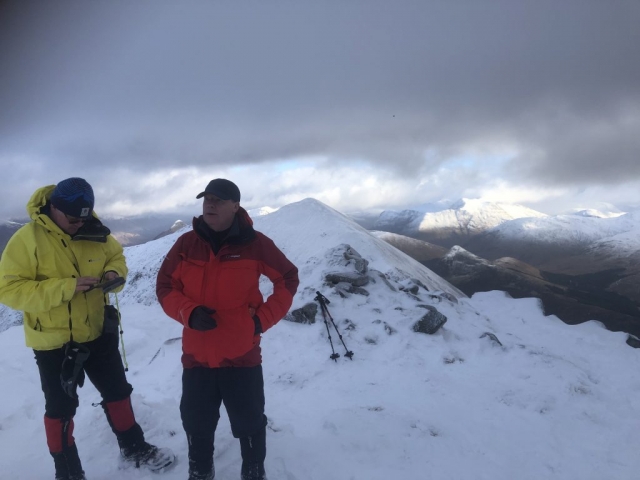 The snow on the walk down from Sgorr Dhearg meant that it was very fairly easy going and we dropped down very quickly.  The forecast for the day offered some optimism, there was a chance that the clouds would clear near the coast. We were starting to believe that they might have got it right!

The walk up Sgorr Dhonuill was fairly steady but there was a short exposed section just before the summit. Once past this tricky section the cairn came into view and the views around continued to open up . We could see that the sun was shining across in Ardgour but was taking its time and slowly tracking SW towards Beinn a’Bheithir. However it wasn’t coming fast enough and it was time to drop down.

Another good day in top company. Chris and I bagged a couple of new hills in our quest. Jim grabbed them for his second loop (9.5 years since he compleated on Sgorr Dhonuill).

So what is next?  We will probably make plans at the Glen on Thursday!