Saturday 30th June 2018 will be remembered as the day that David Thomas completed all of the munros. It will also be remembered by those attending for the plague of horse flies that swarmed around us any time we stopped to take in the breathtaking views.

Only last month David, along with Alan and Jim D, has ventured in to conquer the Fisherfields to leave a Beinn na Lap as the final hill to complete the mountainous set. 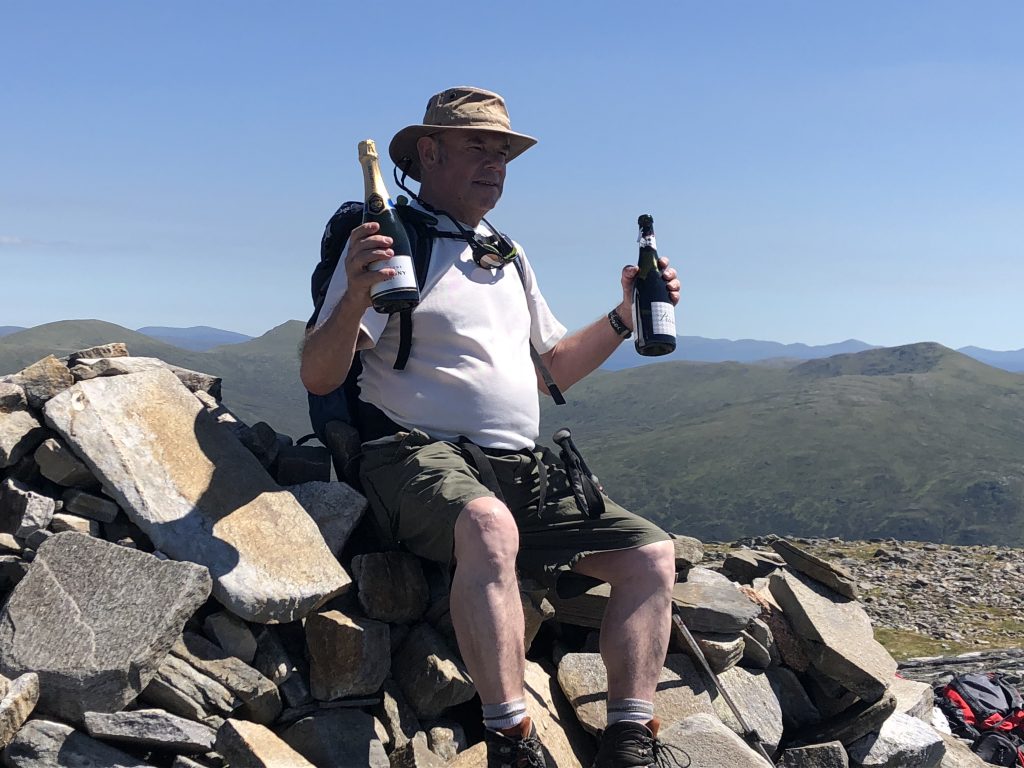 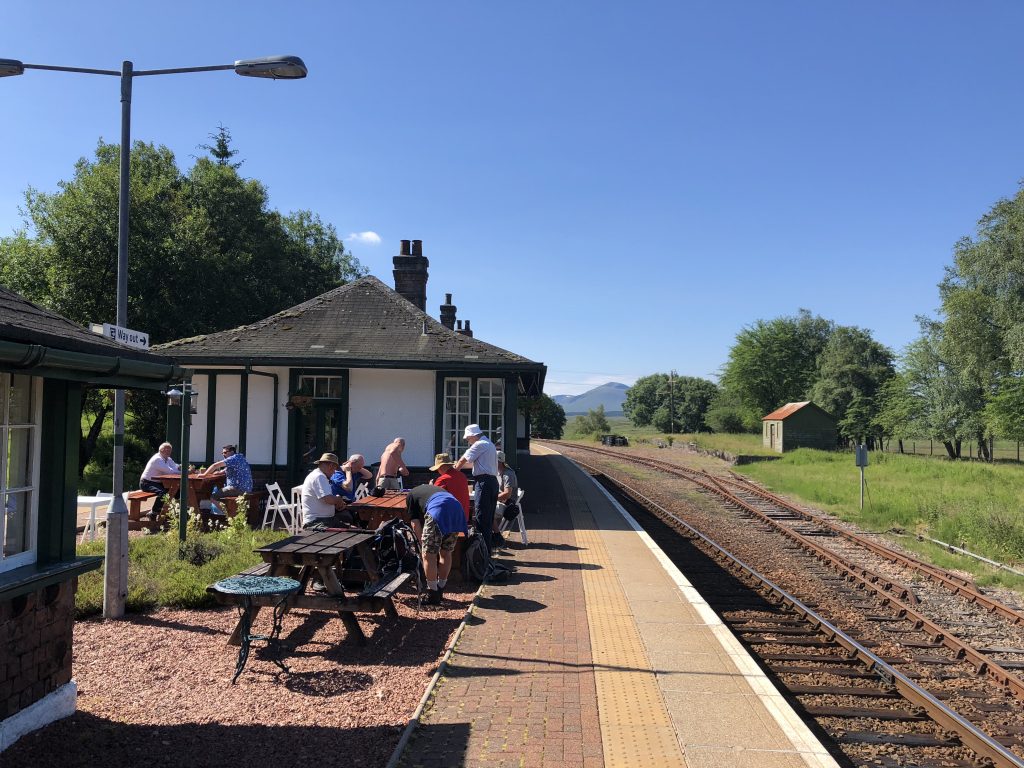 A group of 8 met up at Rannoch Station at around 10:30 for the 11:25 train to Corrour. David T, Alan, Dave P, Kenny, Steve G, Vince, Dennis and I enjoyed a relaxing hour with some self service coffees from the waiting room. Some local deer were wandering around completely unfazed by the gathering travellers at the station. It was at this point we were aware that we were being bothered by the local population of clegs. At least the smidge kept them at bay while waiting for the train and the short 12 minute run to the most remote train station in the land.

There was a surprisingly large number who alighted at Corrour and scurried off to do their days business. For the 8 of us, who had 7 hrs between trains to complete the walk, it was just an easy amble towards Loch Ossian before the turn north to catch the path up Beinn na Lap. Just off the track, near the loch,  lay an overturned SUV – this served as a rather all too real metaphor of David’s retreat from the Mullardochs last year. 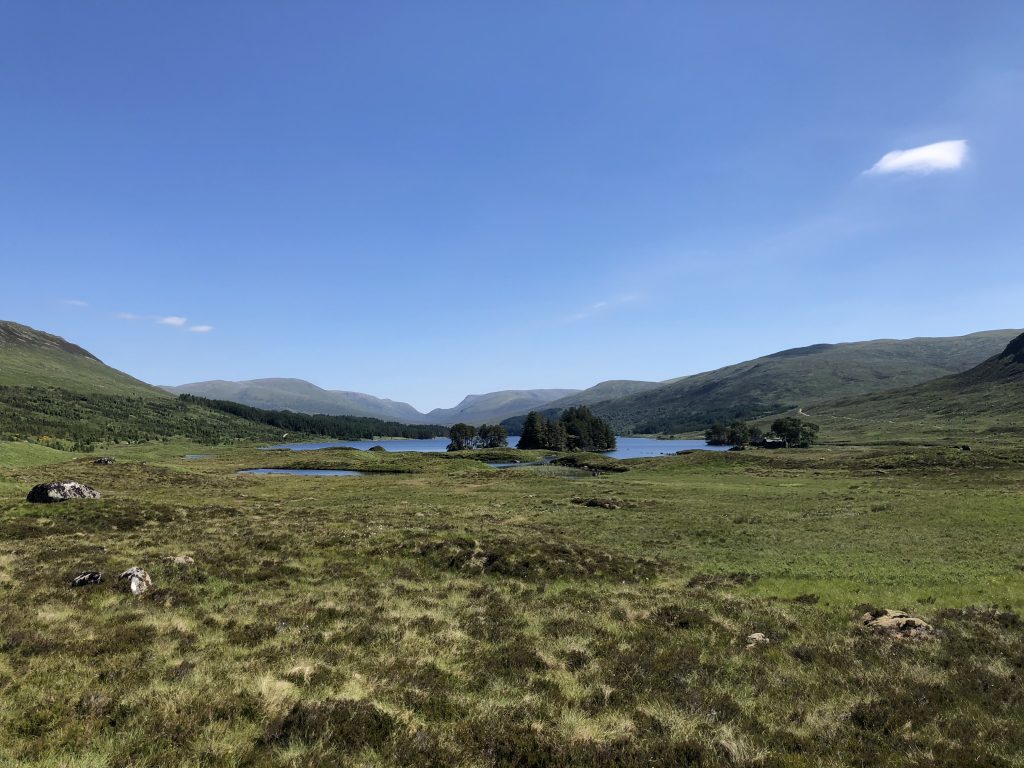 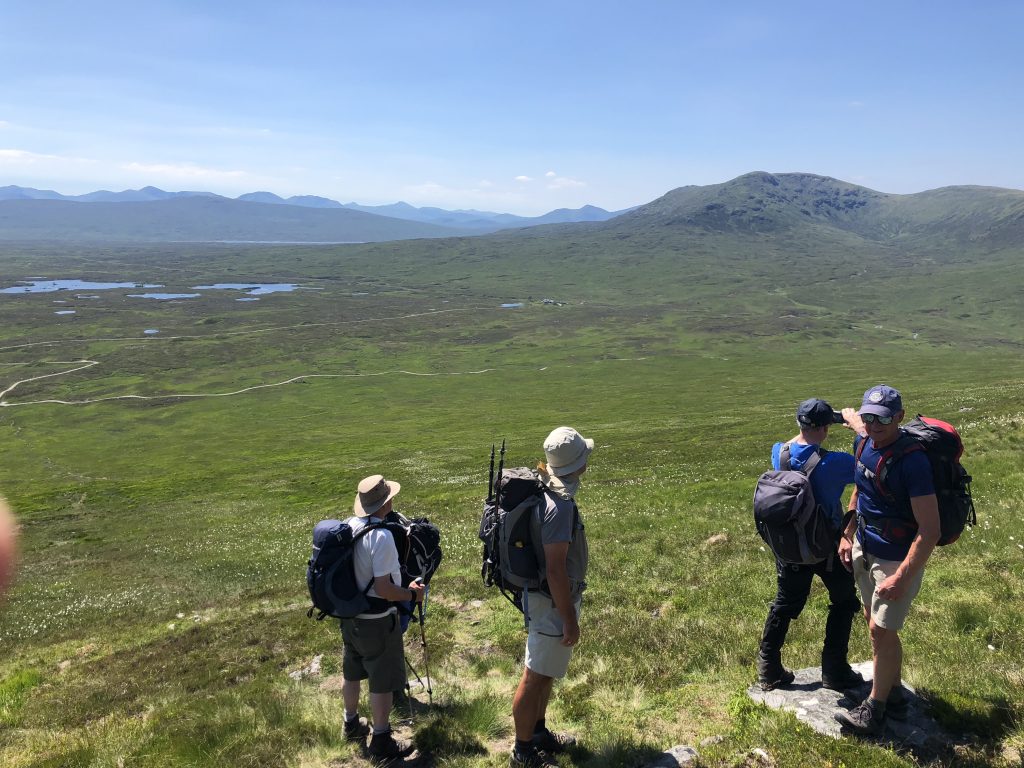 Progress up the hill was quite steady as there was no rush to get to the top. Stops were short however as it didn’t take long for the flying devils to realise that we were easy prey once again. Views were opening up to Glencoe and Ben Nevis / CMD – simply magnificent. Plans were being made to speed things up so we could arrange the guard of honour for David’s arrival at the summit. 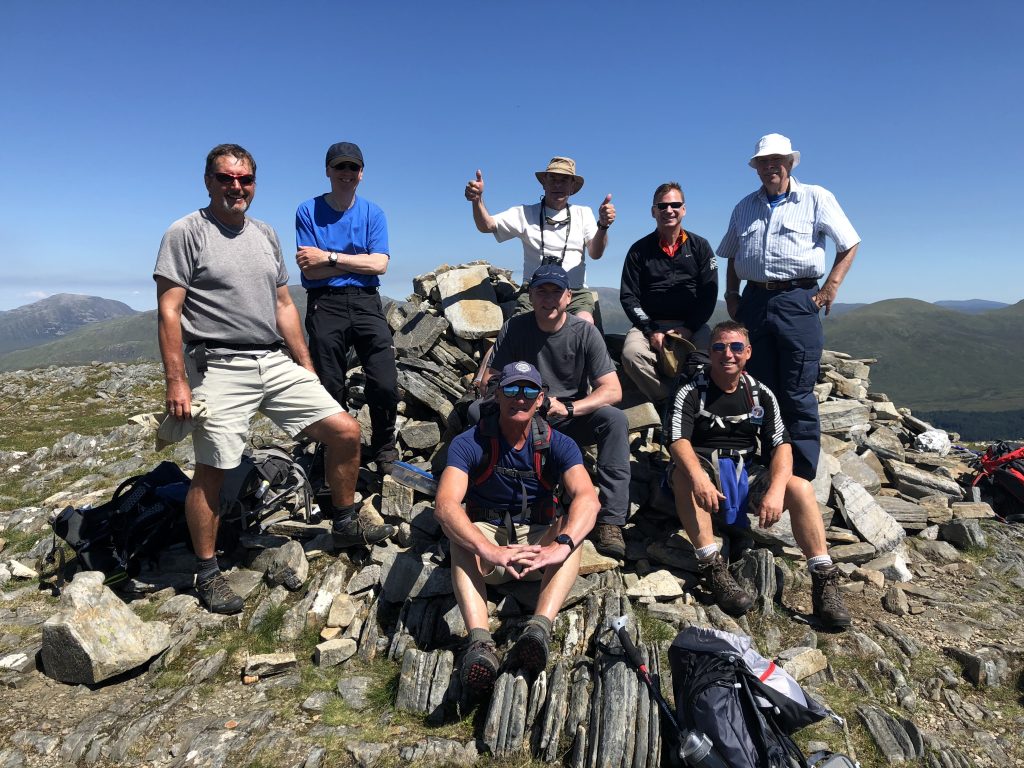 The usual shenanigans occurred to celebrate David’s arrival. Bottles of fizz appeared and hips flasks filled with the finest malt whisky were being passed around. Dennis mentioned that he couldn’t remember ever having washed down a pork pie with champagne before – he didn’t say it was unpleasant so perhaps its something he will look to repeat. After around an hour looking at the uninterrupted views from Ben Alder in the east through to the mountains of Ardgour to the west we decided to head back to the station cafe where we enjoyed the protection from the clegs and and the taste of the homemade scones until it was time to catch the train back to Rannoch Station and the journey back to Dunfermline.

So a massive congratulations to David on completing the round. He couldn’t have picked a better day to celebrate his final hill. Hopefully its not too long until we have another member to celebrate with. 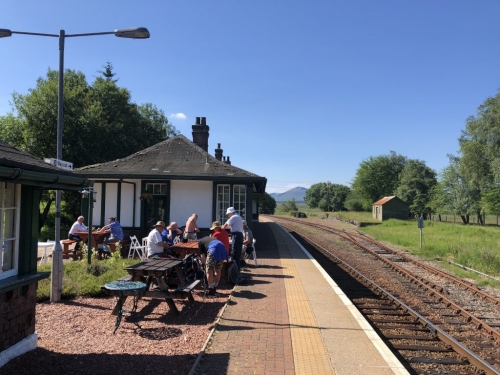 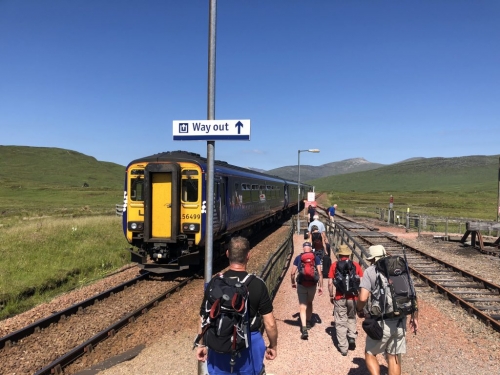 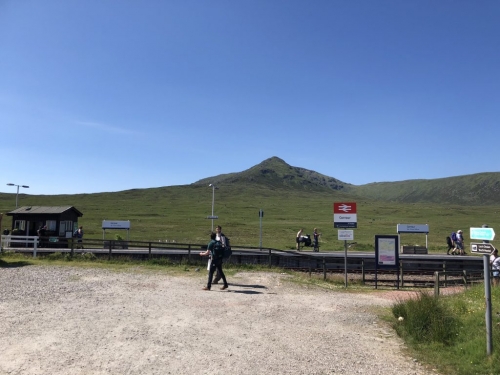 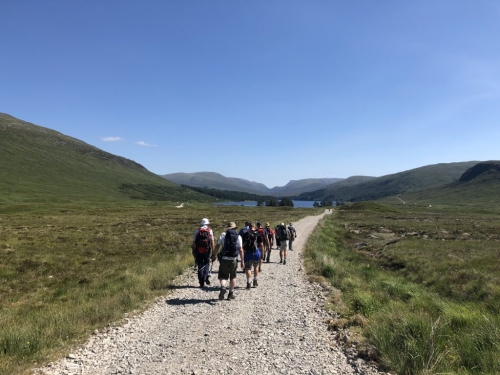 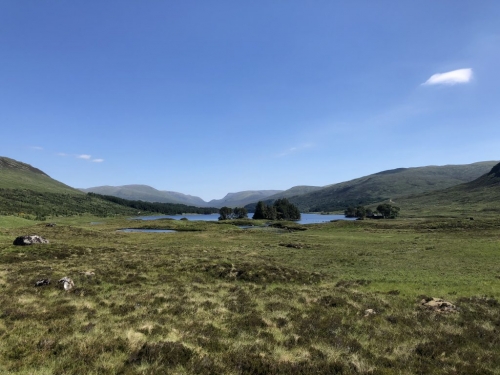 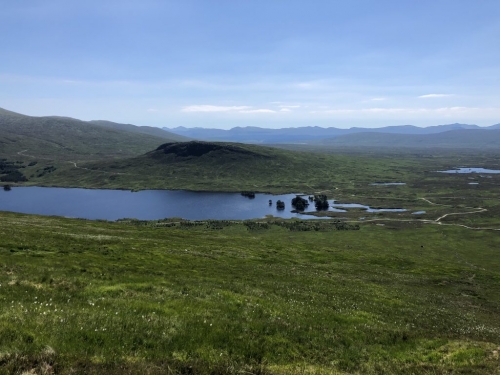 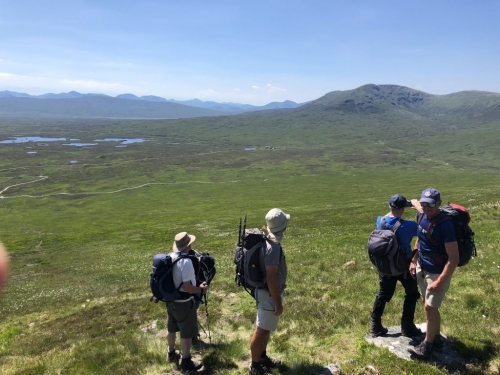 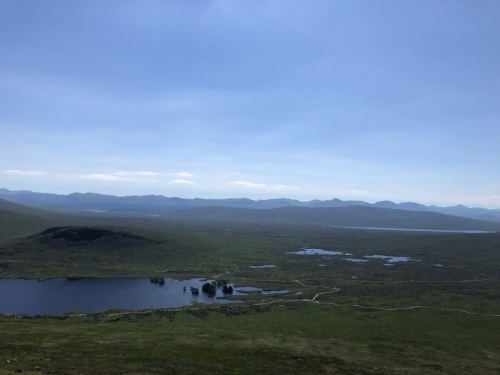 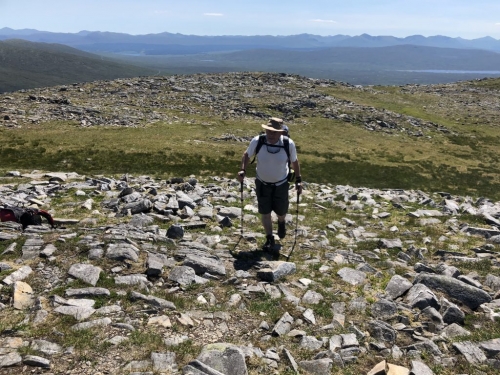 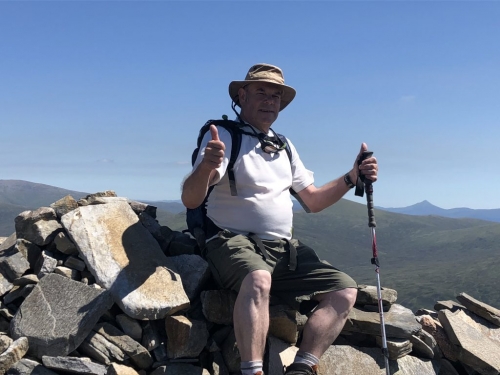 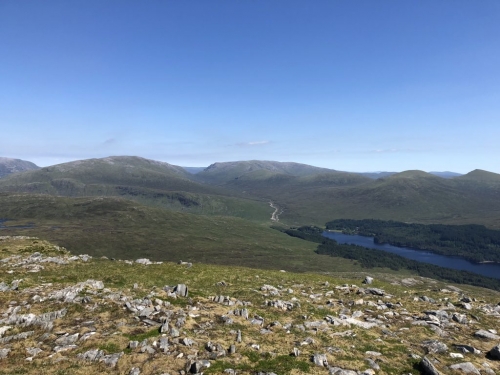 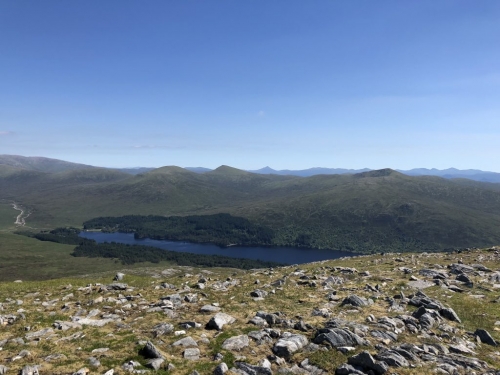 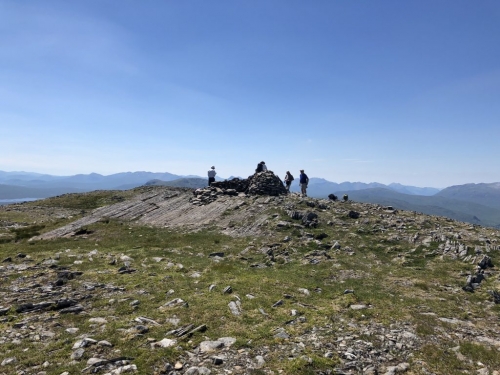 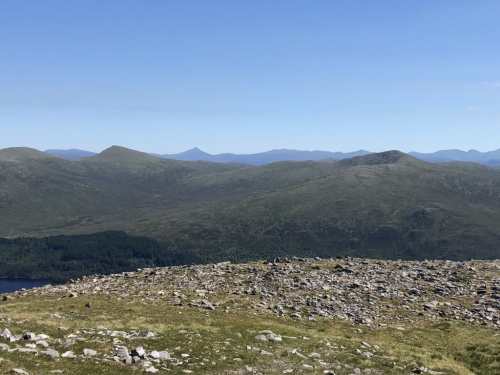 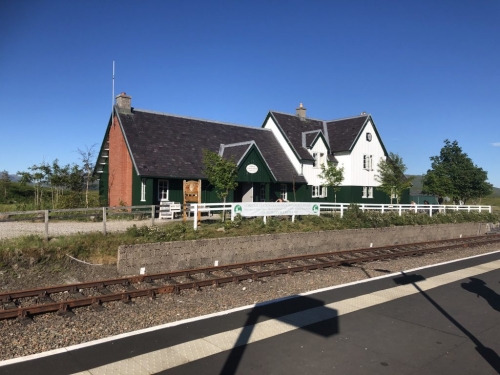 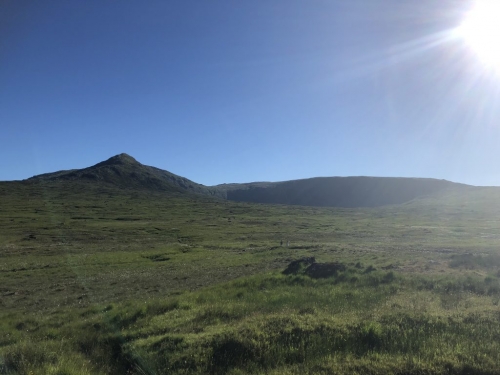 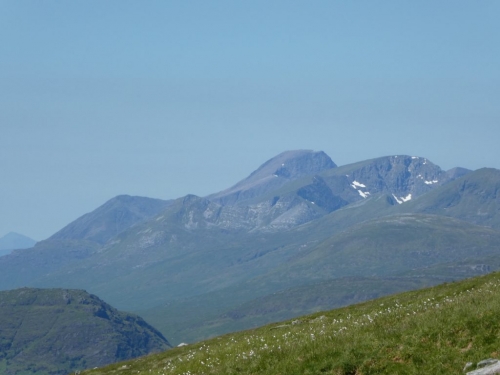 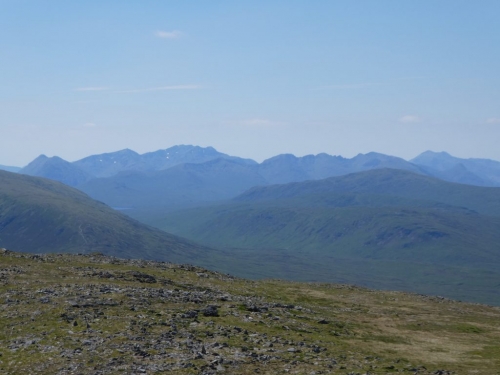